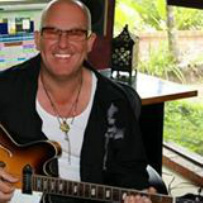 Gary Geoffrey Miller was born on February 29, 1960 in Hessle, East Riding of Yorkshire, England. He took an interest in music at a very early age. After getting his first guitar at the age of 9, he was clearly headed in only one direction. After leaving Sydney Smith School, he began performing in different bands in local pubs and venues as well as working as a songwriter for a local supermarket to supplement his income.

At the age of 23 he made the move to London in the hopes of carving out a successful career in the music industry. For several years he was performing in the bars and clubs around downtown London, however, that all changed when he landed a recording deal with Miles Copeland (best known for founding I.R.S Records). From there he performed with Nik Kershaw on Sir Elton John's tour and George Michael (as musical director for the Faith tour in 1988). Shortly after finishing his touring career with the UK pop duo, Climie Fisher, Gary did studio and TV work with Sting.

Gary moved on to become an integral part of two of the most successful production companies in the music industry. The first of which being Stock Aitken Waterman, who created the massive hits for Donna Summer, Kylie Minogue, Bananarama and Rick Astley, to name a few. Gary then joined forces with London's highly successful production company, Metrophonic, who were responsible for creating worldwide hits for Cher, Enrique Iglesias, Rod Steward, Tina Turner, Lionel Richie and others.

Prior to his work with these production companies, he independently produced artists of the highest caliber which include David Bowie, Simply Red, Donna Summer, Lionel Richie, Billy Preston, Girls Aloud, Charlotte Church, Hall & Oates and many others. Gary has an extensive list of credits awarded to him.
After that Gary focused primarily on independent songwriting and production, which led him to Miami, Florida then on to Malibu, California where he currently works and resides.

Gary also writes and produces music for films and television.

In 2011 Gary became the first English composer to write a music score for a Russian feature film. The soundtrack from this movie was named  best in 2011 in Russia. In 2012 Gary wrote and produced the soundtrack for the first Russian animated feature film in 3D and also for the 12 episodes TV series on Channel ONE.

Gary is also a leader and a regular participant of the Rock Band "Bu-Town Gang", which is already very popular in Malibu, California.

At the present time, Gary is recording albums for a several artists from all over the world. Gary is also working on a few very interesting projects, which include feature films, documentaries and more. Mr. Miller is also committed to the ABOLISH CHILD SLAVERY PROJECT. He recently partnered with Steven Tyler of Aerosmith and David Weiderman of GuitarCenter.com. Please connect with Mr. Miller at https://www.facebook.com/pages/Butown-Entertainment/103129739839994_ to stay updated on this project!